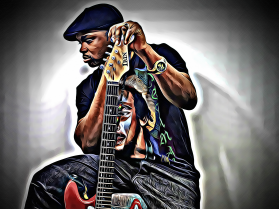 EZ-Q Universe is set to release his sophomore studio EP Compilation entitled ‘The Soul Lounge’ in early 2021. The EP is slated to be a 3 track compilation with a fusion of jazz, soul, latin soul and alternative east coast hip hop. This project draws inspiration from classic hip hop artists and producers with particular reference to J Dilla, Q-Tip and MF Doom. It is niche specific and targeted to an audience of matured hip hop musical aesthetic taste.

EZ-Q Universe released his debut EP Album entitled ‘Soul Volution’ in 2018 which was largely infused with soulful musical instrumentation and vocals with a clean lyrical rhyme delivery. Soul Volution is like a trip back down to the 1988 – 1995 Big Daddy Kane, Eric B & Rakim, Lord Finesse, Show Biz and A.G. era with sound engineering of the current era. A taste of Soul Volution is like entering into a time machine back into the future.